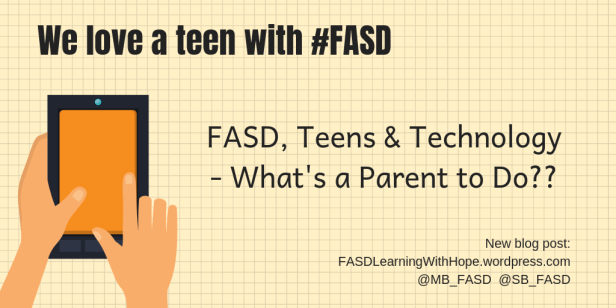 A theme kept popping up at our support meeting recently. It provoked, as it always does, a lively series of comments with distinct points of view. Do you let your kid/s have access to technology. How much access?

It’s something we thought long and hard about long before our younger son was diagnosed with FASD. His older brother loves his tech. He’s a good programmer. He’s a skilled gamer. His understanding of tech is strong and his interest high. So little brother was introduced to computers early on. And we had decisions to make about screen time.

Managing kids’ access to technology is a difficult question for all parents. How much time to allow your youngsters on their phones, on games consoles, watching TV? When do you let them have a phone? How do you keep them safe online? How to manage social media when bullying, sexual exploitation, financial fraud and other issues are so rife?

How much harder are these things to manage with an especially vulnerable group of kids like those with Foetal Alcohol Spectrum Disorders? How can you keep a child safe online when their ability to read social cues is, at best, extremely limited? How can you prevent a child becoming obsessed with an app or a game when repetitive behaviours are a known feature of their condition? How can you keep a child from seeing inappropriate videos when their ability to search for material and use a device far exceeds their capacity to understand what they might be about to watch? Is it wise to give hundreds of pounds worth of phone, or tablet, or laptop or console to a child who can suffer from meltdowns at frustration and risk breaking them?

Neither the questions nor the answers are simple, and they vary child by child and across family circumstances. There is no right answer. But, for what it’s worth, here’s how we have managed things with our 14-year-old with FAS.  First of all, we gave him simple rules: not too much skin, no rude words, no violence no talking with people you don’t know in real life. By and large, for the moment these still work. He explores the edges of the rules, but doesn’t jump in and swim past red lines. He internalises what is right and wrong in a fairly rigid way, and has done this also with online life. Even to the extent that, when watching his favourite band Little Mix, he won’t watch videos of them dancing “dressed in porn”, as he puts it. (Not quite sure where he picked up that word, probably an internet safety class at school.)

So, as long as he follows the rules, we let our youngster have more access than many would think is wise. But for him it works. It isn’t perfect. He has, in frustration or in the midst of meltdown for other reasons, broken phones, tablets and bluetooth speakers galore. This is the easy bit. The organic consequence when something gets broken is that he is without it for as long as it takes to replace it. And we don’t hurry replacements. Everything carries replacement insurance. Either the Amazon Fire for Kids (which they really do replace without asking why) or just phone insurance that pays for the next when a phone is broken. The consequence of delayed replacement is important, it follows naturally from the breakage and emphasises that this is something that can be accepted as resulting from a symptom of FASD, but not otherwise. He broke a laptop two years ago and we are just now thinking about replacing it.

For us the type of device acceptable was also easy. All of them. Any of them (within our budget). They each have a purpose, a different use and each can be valuable in its way. The Wii is now an ageing console, but its games still have a place in our son’s life. They tend to less violent, less scary – much more suitable for him than many of those on offer on other consoles. From the simplicity of Wii Sports, to the deductive reasoning needed to complete Lego Harry Potter or one of the Hannah Montana games, it’s amazing to watch as his thought processes strengthen as a result of puzzling out parts of games involving characters he loved. These were, genuinely, life skills he was learning. For fun, he learned to make movies with one game and to sing his favourite songs with others. The Wii will probably soon have to be replaced with a Switch, but its role will be the same.

His tablet, restricted to appropriate content, was a real boon too – before it was broken. (Still not replaced.) For our son, a cartoon like Tom and Jerry can be a tool for building social awareness. He showed us a picture of an angry character with a bright red face – “look, that’s what I feel like sometimes!”. He learns social lessons from his favourite YouTubers. Their extreme actions, looks or sounds show him the boundaries of acceptability. He watches things time and time and time again, figuring out what is socially acceptable and what is not. He also made hundreds of videos of himself making faces, saying things different ways – we believe this was his way of exploring how to act in situations. For a kid who finds social cues hard to read, this kind of education is vital. He doesn’t really watch much TV. He has a mini-DVD player and watches movies at his own pace, in his own way.

From his phone he gets music. The love of his life. Streamed music. He uses it to calm himself. In an evening after school he will rock in his bed to loud, loud music. Calming himself. Erasing the stress of the day. Building down from potential meltdowns. It matters so much. The phone also works to connect him to friends. Being with someone can be hard for him. Sometimes joint activities don’t go well. Social situations can be hard to navigate. Rigid thinking can bring tensions. Kids that both have multiple disabilities can easily misunderstand each other. Being with them across a distance of miles on FaceTime can be easier. We hear him joking, laughing, talking, enjoying friendships. It doesn’t mean it’s always perfect. One friend couldn’t understand that calling repeatedly as late as midnight wasn’t ok. But, overall, it’s a tool that helps build relationships. It could be dangerous. While he doesn’t (yet) break the rule about linking with strangers, he has been very happy when social media accounts linked to popstars or TV personalities have sent him messages, after he left messages for them. The risk of inappropriate contact is there. And for a child with delayed social development, the risk is heightened. So we talk to him about who he is talking to, and we have access to his devices. We work at keeping him safe.

It’s not just at home that technology helps. In school, the use of a netbook in lessons helped our son to focus before lessons. Typing allowed him to get ideas from his head to the page in a way that handwriting never did. Suddenly, instead of a line he could write a paragraph, as he could type quickly enough to express himself, whereas he couldn’t hold an idea in his head long enough to write it out with a pen.

And this is the future too. The role of technology in our society is growing. It surrounds us, penetrates our lives in ever increasing ways. He will use phone apps to manage his life. He will be able to speak to his phone to find recipes, generate a shopping list, buy groceries online, do other shopping. He already relies on YouTube videos for instructional videos for everything from slime to hairstyles to recipes. Microsoft Office has built in voice recognition software he’ll be able to use to read documents, write them, send emails and more. He will be able to manage his prescriptions and doctors’ appointments through an app, we do already. We are at the beginning of mindfulness apps that help people manage stress and anxiety and contribute to reducing the possibility of meltdown. All this will help him build a measure of independence in adult life that would otherwise be impossible. The opportunities are, at present, seemingly almost limitless.

We’re not naïve. We are aware of the dangers. We guide our son to use online services and entertainment as safely as possible. We know that for many the use of screens is a huge problem. That obsession with online content is a real risk. That there are predators. That some are unable to have access to games with in-game payment safely. We know that what I have described is our reality, not that of others. If things change, we will change our rules.

We have chosen to work hard to help our son access technology because for our kids technology is the future. It can help them navigate life with FASD. It can be a massive support. They will have to deal with it as it becomes omnipresent in all walks of life. Our job is to help our son do so safely, to help him thrive. In the meantime, if you stumble across his YouTube channel, give him a like and leave a positive comment, it means everything in the world to him.