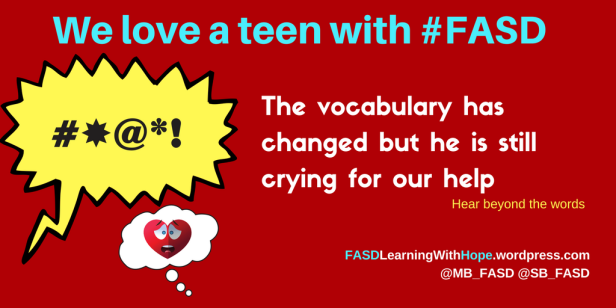 Adoption UK carried out a massive media blitz this week based on a survey that said 25% of adoptions risk breakdown because of a crisis fuelled by the trauma children suffered in early life. Trauma which leads to aggression and violence in the adoptive family. It is a picture that a lot of families with children with FASD recognise, although Adoption UK never mentioned FASD in their media work. While not all children with these issues have FASD, it certainly struck a chord with me.

Most kids with FASD lack impulse control. That includes over language. Bad language.(There is some research that says language is stored in a different part of the brain to other language, so this may be related to brain wiring too.)

We have a lot of bad language in our house. A lot. And, following the advice of professionals, we ignore it. Most of the time. We have to. If we didn’t we’d be in constant opposition to our son, in constant conflict that would help none of us.

He doesn’t mean it. A very clever educational psychologist once asked us “Why do you assume intentionality?” when discussing some of our son’s seeming acts of defiance. That struck home. We had been assuming that our son was being deliberately naughty. Oppositional defiance disorder is a thing. Some kids with FASD have it. Our son doesn’t. He just can’t control his impulses while dysregulated or partially dysregulated. So a stream of insults fly.

In the mornings and in the evenings, around the edges of his medication, he is partly dysregulated. And at those times the language comes out.

It’s very difficult. We struggle with this in a big way. I do especially. Not because of the words, but it gets really hard as it’s tied up in his refusal to let me help him much of the time. It feels like a strong rejection. (My wife tells me I am not seeing just how often these same words are used in her direction.)

But when addressing me, he always wants Mum. At least, when Mum’s there that’s how it is. He calls for something. I go to his room, and get a string of expletives and what feels to me like rejection.

I bring him food, and he won’t even look at it because I breathed on it. Happened just recently, I made mini-cheeseburgers to eat but I breathed on the food. So it’s covered in germs. Sometimes the reaction is physical and can hurt, but the actual blows are the easiest to take, it’s the emotional ones that are harder to shake off.

It’s really hard not to take this as rejection. I know that many times I don’t do a good enough job of showing that I’m relaxed. That I’m not irritated. That the bad language washes over me. Which generally it does. But the constant pushing away his harder to deal with. At a certain level it hurts.

I know he doesn’t mean it because he often does let me do the foot rubs and the leg scratches. When Mum is away, or just out, then all of a sudden my attempts at cookery are suddenly acceptable, and my help with the latest project really needed.

Our son isn’t proud of these moments – he apologises after the fact, he comes back to build bridges.  He stays close.  (He once famously told a deputy headteacher that he had been dysregulated when he cursed at him, he couldn’t help it then but he was sorry – a pointer to the fact that, with self-awareness, change happens).

The ways in which aggression can manifest itself are complex.

In a drive to highlight a very problem, and look for government action to support adoption, Adoption UK risked leaving an extremely negative picture which will undoubtedly put many people off adopting. As an adopted person myself, I would have done it differently. I would have painted the picture as bleak as it needs to be, but then softened it with hope, and a perspective.  In our house we have elements of all of those things that were splashed across the media following the results of the survey.  It’s not that we don’t get it.  But because we know the reason for our son’s behaviour, we frame our approach accordingly.  Importantly, we have a diagnosis in place as we head into the coming teenage years, something the experts say is vital to chances of a successful transition to adulthood.

Once you reinterpret the behaviours as a symptom of the condition, and learn strategies to address the underlying need, the sense of crisis diminishes.  A year ago we were in an intense period of crisis but things can turn around.

If you can’t change the child, then you have to change the environment around the child. You have to reduce reasons for anxiety. You have to adapt their environment so they can live as calmly as possible as much of the time as possible in that environment. You have to give them the time they need to adjust to change, whether that change is getting dressed for school or moving from one activity to another. We’ve changed his room, put in a quiet space and let him have disco lights that calm him. We let him dress how he wants to go out, not how we would like. We adapt because he can’t. And we’re lucky, friends and family have adapted too.

Things have got much better with time as we have learned to do this. He has learned as he gets older to begin to understand his triggers and to ask for help. He has been helped definitely by meds for ADHD.

No child is unchanging, nothing lasts forever. Situations change. And we have to change along with them. I have to do better at soaking up the bad language, and helping guide our son to a calmer place when dysregulated.

One thought on “Four Letter Words for Help – FASD”