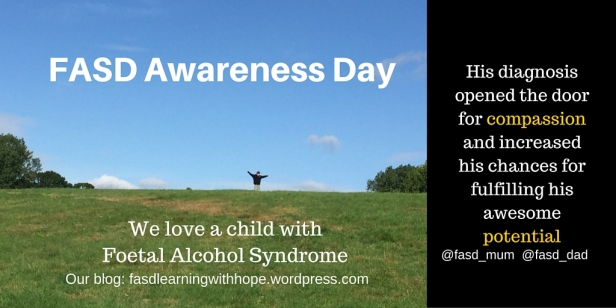 Today, 9 September is Foetal Alcohol Spectrum Disorders (FASD) Awareness Day. People internationally use this ninth day of the ninth month to raise awareness of the damage that can be caused by drinking alcohol during the nine months of pregnancy, damage which can exceed that even of heroin and other drugs.

I have been trying to decide what to do or say today about FASD awareness.  Such a jumble of thoughts and emotions comes to mind.  But mostly an image of our 11-year-old son, smiling and dancing and laughing, keeps coming into my head, blotting out all the statistics and academic articles.

Our son received a diagnosis of foetal alcohol syndrome about 16 months ago.  Having this diagnosis was eye-opening after years of trying to truly understand his various sensory, cognitive and behavioral issues. Parts of our son’s brain are damaged forever as a result of prenatal alcohol exposure.  It is irreversible.  Those words were devastating.  They sent me into what I see now was a mild depression.

But, that diagnosis was also a gateway to increased compassion.  We suddenly understood the huge difference between “won’t” and “can’t”.  The different parts of his brain cannot communicate in the typical way.  His brain can get easily overloaded with input forcing him to “shut down” and go into a defensive mode that sometimes reminds me of a cornered cat lashing out when it doesn’t know what else to do. He can’t always remember things he has learned.  I believe it’s in there, but it seems he cannot always access the pathways to that memory.  So we help him learn using all of his senses.  Sight, smell, touch, and taste all use other neural pathways and they help him to hold onto what he has learned.  His “executive functioning” ability is affected – he struggles with concepts like time and math.  Now that we know this, we help him use the many tools available in this world of smart phones and other technology to compensate for this (is it so bad if he needs to use a calculator in a  shop?). Importantly, we have learned to parent differently.  His emotions are developing at a slower rate and so his behavior is often that of a younger child.  We learned the importance of creating conditions to avoid meltdowns.  We learned that timeouts don’t work, as he cannot link the behavior to the punishment in that moment.  Later, after a meltdown, we can talk about what he did wrong.  He is always remorseful.  He does know right from wrong.  But in the moment, he can’t stop a meltdown.

Each child with FASD is different.  The brain is mysterious and magic.  With proper understanding, a diagnosis of FASD is not a life sentence, but a door that opens up possibilities for vastly improving a child’s potential.  We can work with our son to help encourage his brain to re-route itself.  If he were blind, deaf, or missing a limb we would make accommodations for him.  So too we must make accommodations for his brain damage.  We must give him a toolbox to use when he finds himself lost, confused, or overwhelmed.

Most of what will be written and talked about today on FASD Awareness Day will be about prevention, which is clearly important.  But equally important is addressing the needs of the kids and families in our communities who deal with the effects of FASDs every day.  Kids are struggling in schools that don’t understand their needs.  Tragically, all too many remain undiagnosed or underserved by the medical community at large which has yet to come to terms with this epidemic (though there are some medical experts pushing for change).  Many parents of kids with FASDs are at their wits’ ends.  They feel like they have no support.  Some lack full understanding of their kids’ needs, because “the system” has not given them the information and their lives are too hectic to dig it out on their own.  (We waited a year for the full report of our son’s diagnosis due to a backlog at the sadly underfunded, understaffed national clinic we were fortunate to have access to, and the services made available to him are only now starting to become clear to us.)  We finally accepted the need to stop pretending everything was okay in our house.  We started to talk to more friends, family, educators, and colleagues about this diagnosis.  The response has been overwhelming supportive.  It really does take a village.

So, for us, a diagnosis of an FASD was the key to the opening up of our son’s chances for fulfilling his potential and exceeding the grim statistics that scare the hope out of many parents of kids with FASD.  Nurturing his self-image is critical.  He knows he is different.  He is frustrated often.  He acts out in ways that would leave most of our grandmothers tutting in disproval, both at him and at our response. I have learned not to care what others might think, because they do not know at first glance that our brave and determined son battles an unseen disability every day. Those flare ups are only ever a small portion of the day.  What defines our son, and the image that comes to my mind most, is the happy, loving, energetic kid who loves to sing, dance, flip, sail, swim and soar.  He tries harder and more persistently than anyone I know to be a kind, informed, and loving member of our family and our community.  His diagnosis means we can help him.

For more information: The US Centers for Disease Control has a new app with all the latest information, very user friendly.
http://www.cdc.gov/ncbddd/fasd/multimedia.html