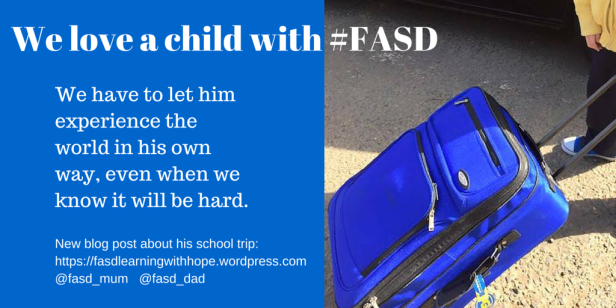 Knowing he is out there, on his own. Trusting he has enough positives to make it through the negatives.  Hoping he understands himself well enough to know his limits and his potential.  Praying if he gets into a dark space that someone will help him through to safety.

Parenting a kid with special needs becomes symbiotic. The parenting role has another intensely intertwined level of help and assistance that means you are not only preparing to launch your child out there into the world, but you are walking with them, they are leaning on you each step of the way.  The time for and definition of independence is not the same as with other kids.  It makes you reevaluate terms like “independence.”  But then, who among us is truly independent anyway? None of us.  We all need someone.  Kids with special needs can be independent, but in a different way.

Our son is away with his class for the week.  These mornings, he does not come bounding down into the living room with his always energetic eagerness and huge morning smile.  He is somewhere else, coping on his own, living his adventure thanks to a mainstream school teacher who has gone the extra mile to make this possible.

I have never really understood those parents who cried at school gates as they left their kids for the first time, or those parents who lingered at the door when dropping their kids off for a sleepover or those who called frequently when leaving their child with someone else.  Our eldest has been outgoing, self-supportive, and easily adaptable since day one.  But when we dropped our youngest at the school and he wanted us to leave him in the hall as they waited for the bus to come, I felt like those parents must have been feeling.  This time, I wanted to stay to reassure myself that he would be okay.  But we did leave as he asked (after checking with him four times to be sure that is what he really wanted), hopefully giving him that confidence that comes from knowing that we trusted he would be okay.

I hope he is okay.

He will grow up.  He will grow up with a disability.  He will become a man.  He will become a man with a disability.  I never want this disability to define him.  It is a part of him, and that should not be hidden or denied.  But he is more than the tests, more than the diagnosis, more than a statistic. He is a brave, smart (yes, he is smart), caring, seeking, stretching, fine young person who has to find his way – with help – in this busy world.  I am proud of him.  And I miss him this morning.  But I know, really know, he is okay.  And we are going to have to give him more independence as he gets older.  I am going to have to trust this world to treat him gently, to guide him away from dark places and toward the future he deserves because he tries so damn hard every day of his life.